"It's just that I'd rather die of drink than of thirst."
Ian Fleming.


So the latest Bond outing is on the screens and making the big bucks. Highest grossing UK opening weekend of any movie ever! 'Best Bond yet' they said, 'Worth seeing then' - I thought.

But it isn't. Not even slightly. It's not 'Best Bond', its not even 'Good Bond', its actually Weak Bond, Emasculated Bond, Old Bond. Bond stripped of his sexiness and power and made old and feeble. in fact it's 'Has Bond' 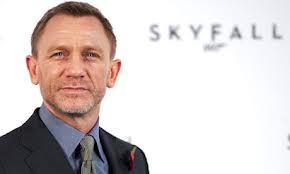 So whats wrong with it exactly?

Well basically the plot. Deranged Baddie, Silva (Javier Bardem) is out to kill M (Judi Dench). Why? because she dumped him as an agent years ago and he wants revenge. He's also gay, but apart from a bit of touching Bonds pecs while he's tied to a chair, (Bondage?), his sexuality isn't really examined. 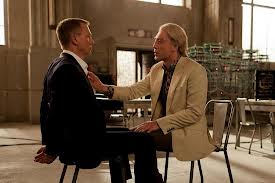 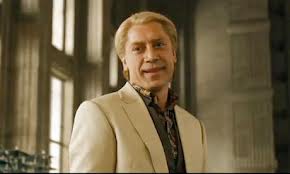 He is able to hack the British Secret services hardened network and blow up MI6 headquarters using just his laptop and their central heating system, no really, I kid you not - Fecking good job Al Qaeda don't have laptops! (or maybe theirs have all been paralysed by upgrades to Windows 8?).

Bond, fresh from being accidentally shot by Miss Moneypenny (Naomie Harris) while on a job,  - you can see why she ended up as a secretary after that - although she did something the Bond Baddies have never got close to, she very nearly killed The Man - how he survived being shot off a train and plunging 100 ft into a river is somehow overlooked, just luck I guess. 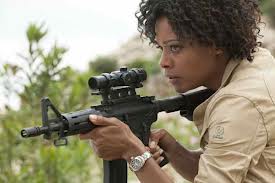 Anyway, Bond is sent off to track down the mystery hacker and meets the first real Bond girl of the movie Sévérine (Bérénice Marlohe).  Like most Bond girls her life insurance company is almost instantly in deficit, in fact she lasts about 5 minutes. 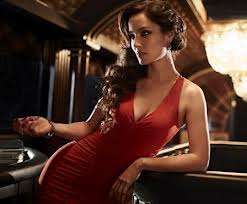 Not a great scene for Bond, He has to do a William Tell job with an old duelling pistol and a glass of scotch on her head. He fluffs it, but misses her, so the Baddie shoots her. Only then, does Bond grab a real gun, kill everyone within shouting distance (except the Baddie of course), and take the Baddie into custody with the aid of 4 helicopters worth of reinforcements.

Now not to pick hairs or anything, but if Bond had just spun it out a bit and let the helicopters arrive, or grabbed the gun and wasted everyone a bit sooner, Sévérine, might have lasted another scene or two. Maybe she didn't floss enough?

So, it turns out that the Baddie wanted to be captured just so he'd be locked up close to M. A couple of points here. Firstly, does no-one build prison cells any more? You know, concrete rooms with metal bars? Ever since Silence of the Lambs, if you want to make your Baddie look REALLY DANGEROUS, you put him in a glass walled room inside a basketball court. Hannibal started it, but X-men's Magneto got the same treatment. And so to Silva, they don't chain him to a post in a dungeon, they just put him in an (electronically locked) glass room.

A room from which he easily escapes when Hyper Nerd Q (Ben Whishaw), who reportedly has a brain the size of a planet and  'invented' the mega secret encryption routines used to safeguard our most secret, er, secrets, happily plugs the Baddies laptop into MI6 network and lets it unleash a killer virus that immediately sets the Baddie free.

Now again, maybe I'm a bit simple, but if your Baddie is known to be a 'Genius Hacker', maybe plugging his laptop into your net is not such a bright idea? Maybe just keep it isolated on a small local net, one that doesn't connect to your door lock controls? OK, - wild and crazy plan I concede. 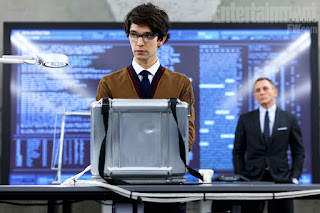 Oh yes while I'm on the subject of Q, previous Quartermasters have given Bond everything from cars with ejector seats, micro rocket firing autogiros, and watches that could unzip a dress at 20 paces. What does Craig's Bond have to manage with? A gun that will let only him fire it, and a homing radio the size of a fag packet. Now he could ensure that only he could fire the gun simply by KEEPING HOLD OF IT, and even real life tracers these days are no bigger than a postage stamp, so these devices were not exactly cutting edge. OK I'm not asking for invisible cars, or submarine Lotuses but maybe a bit more decent weaponry isn't too much to expect. I mean why not at least make the gun blow up in the wrong hands? That would have been helpful. And why not give Bond TWO GUNS? Your average LA policeman is usually tooled up to the gills, with service weapon, ankle strapped revolver, switchblade, and probably a cosh or two. Bond gets one 9mm pistol, to take on an army. And that 'pocket' radio? designed in the 50's no doubt. Might as well have given him a homing pigeon. 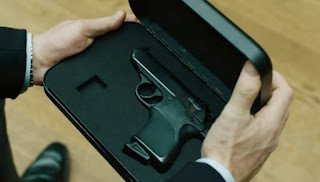 Back to the plot, Bond chases Baddie across the London underground, pausing only to miss him from a range of about 20 feet while he climbs a ladder, which turns out to be all part of the plan as the baddie who has an even bigger radio, blows up the tube and dumps a train on Bond.

Now as a set piece it is quite visually impressive, a tube train crashing down into the tunnel and all that, but as a plot device? Wouldn't it have been easier to just lob a grenade? or blow up the bit of tunnel Bond was standing on? Guess not.

So chase continues, Baddie almost gets to kill M who is being grilled by the local Public Protection Committee, and is  accused of being a grandma in charge of HMSS (guilty as charged I'm afraid). 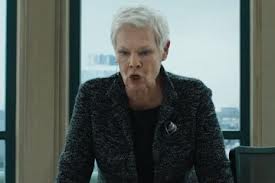 Bond arrives, and with the aid of Ralph Fiennes (can't remember his name but you know immediately that he's M's replacement) manages to chase off the Baddie and Rescue M. 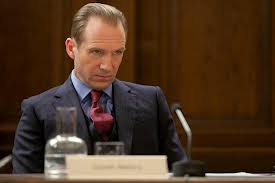 Now at this point we have to suspend disbelief completely and enter LOTR territory. You know, that plot that says 'This is the most dangerous Ring in the world, it could DESTROY us all! What shall we do with it? - I know lets give it to a Hobbit and send him to the bad guy" Yeah good plan guys, safe, you know? I mean an alternative 'lets give it to one of Gandalf's giant Eagles and get him to drop it into mount Doom's lava', would have cut the whole ridiculously long winded boring saga down to a page and a half.

So Bond wants to keep M safe, and use her as bait to lure the Baddie out of cover. OK, so he drives her to his remote Scottish mansion. Once again, call me daft, but given that he WANTS the baddie to find them, could he not have popped into a military base on the way (there must be one still open somewhere between London and Scotland) and picked up, you know, a bit more ammo? A sub machine gun? A stinger missile or two? maybe a couple of hundred squaddies as cannon fodder? No, his cunning plan is to lie in wait for the baddie armed with two shotguns and Bernard Cribbens (actually Albert Finney but he looks like Bernard Cribbens). 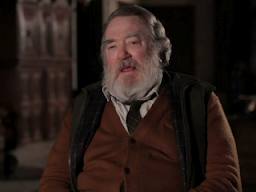 Oh yes and while I'm on the subject, he tells Bond he's kept his fathers hunting RIFLE for him, when in fact it's a 12 bore side by side shotgun. Not a mistake even a doddering old fart like him is likely to make. 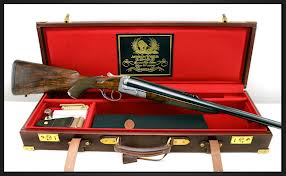 So we enter the grand finale and it's basically 'Home alone 4' with explosives.  M, Bond and Bernard (sorry, Albert) set trip wires and traps all over the old house, the first wave of baddies arrive and get variously shot, impaled or otherwise blown up, the second wave arrive in a helicopter and blow the house up.

M and Albert escape and hole up in the only other easy to spot landmark for 100 miles around, the old church. (Hiding 500 yards away in the bracken would have been too easy). Baddie arrives, is about to kill himself and M, gets stabbed in the back by Bond, dies, then M , mortally wounded by a shot in her bum, also dies. A sad 'end' indeed. In fact the Baddie got what he wanted, he's dead, and M's dead. What bloody use was Bond?

And sadly that is the overall feel of the movie. I've been a huge Bond fan ever since Dr No. - Ok there were the famine years of Roger Moore, but at least Live and Let Die had a catchy tune or two, (and that's another thing, Adele may be a great singer but Skyfall theme is complete dirge, can't see anyone humming it next month. The great themes of the past, You Only Live Twice, GoldFinger, From Russia With Love,  all stay with you because lyrically and musically they are wonderful evocative pieces of music. The Skyfall theme isn't.)

But getting back to the movie itself, it takes everything away from Bond, his gadgets, his sexiness, his power, and leaves him with, well what? He fails his performance assessment, he misses practically everything he shoots at, he gets his girl and his boss killed, and he spends most of the movie looking like a beardie hobo. 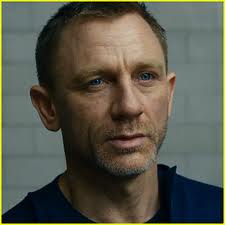 It's not Craigs fault, he does his best and looks the part when allowed to. He runs and jumps and does his own stunts well too. But whoever put this travesty together has missed the point. Bond is a Badass. Bond is power, vengeful might, Bond is retribution, served up to Baddies the world over. Even the Moore era pastiches stuck to this. Ok they added lots of (too much) comedy and panto, but Bond still kicked ass and WON. Skyfall is humourless and melancholy. Bond's one liner 'quips' remain, but don't work. There is no lightness of heart in the whole film, and ultimately Bond and it both fail dismally.