Until it goes wrong - then it's indistinguishable from anything else that's completely fubar. in fact I think a second quote might be better here,

To err is human, but to really foul things up you need a computer.
Paul R. Ehrlich


So what a week that was. First, we lose Steve Jobs, then Dennis Ritchie, then Blackberry 'crumble', and finally Apple launch iOS 5 and the iPhone 4s.


On hearing of his death, I didn't immediately remember who Dennis Ritchie was, or where I'd heard of him, but the guy who gave us Unix and C has left us a greater, if less obvious legacy than that left by the founder of Apple. Ritchie might not have had a rock star profile among the the general public, but to millions of  sandal wearing beardie programmers he was barely one step down from God. Ironically, the new Apple iOS 5 , and its arch rival Android, are all built upon UNIX foundations so Ritchie's genius is carried today in the pocket of just about everyone in the civilised world. Well everyone with an iPhone or Android smartphone that is. Of course some damfools carry Blackberrys.

Someone on the Daily Mash said that Blackberry users think they are important, iPhone users think iPhones are important, and android users are just poor and unimportant. Dunno if that's true, but apart from having to send a couple of emails for my daughter whose Blackberry was down, I was left undisturbed by the global cataclysm resulting from Research in Motion's router crash.


A lot of folks got very steamed up about it though. Apparently RIM didn't keep everyone informed well enough about what had gone wrong and when it would be fixed. Some poor souls had to endure TWO WHOLE DAYS without instant messaging or Facebook access! You wonder how they coped and if they now need counselling?


The Apple iOS 5 launch, was also not glitch free. I'm a big fan of all things Apple. I've had iPhones since the first one, and these days have just about completed the transition from PC to Mac. The move has been stimulating and not without the odd moment of pain. Some things Apple work superbly well, some things suck the big one. Aperture's integration with Flickr is in the latter category and has cost me hours of my life that I'll never get back.


So it was with a mix of anticipation and trepidation that I approached the iOS upgrade. For starters it was not an entirely trivial task. With a MacBook, iMac, iPhone 4 and iPad (1) to upgrade it was kinda tough to know where to start. In the end I did the Macbook first, which involved updating the Lion OS that I'd only recently installed, and upgrading to the latest iTunes. Fortunately I chose NOT to do this on the day of launch, because 100 million geeks and fanbois the world over were hammering Apples servers and wondering why it was taking so long to download. I waited until the day after!

I also did it first thing in the morning when America is asleep ;-)

It worked. That's it. no glitches, no lost data, and after about two hours I had all 4 devices updated and was enjoying the delights of the iCloud, er, except that there's really not that much to enjoy.

As a Mobile Me user I already had 20Gb of cloud storage, so another 5gb 'for free' wasn't too exciting. Oh and the document integration seems to only work with Apple's own iWork suite not MS Office. Mail and Calendar are no different from their Mobile Me predecessors, Contacts sharing is similarly ho hum, which leaves us with Photostream.

What a great idea, I take a pic on my iPhone and instantly (well about 15 seconds later) it appears on my iPad, MacBook and iMac! Fantastic. Except it was a picture of my thumb, so I took four more till I got the shot I wanted. but now all 5 are in my photostream and guess what - there's no 'delete' function. EVERY photo I take goes up to the cloud and ripples down to my iDevices, and stays there for 30 days. OK I can 'reset' my photostream and delete the lot, but I can't just delete the odd mistake. And you know those pix I was taking to see how big that spot on my right buttock was growing? oops!

I suspect a few celebs might suffer the odd embarrassing moment courtesy of this particular piece of folly. Isn't that right Scarlett? Yes I do mean you. OK it's only a 'beta' but deleting your own unwanted pix should have been a release one piece of functionality.

At least Apple have improved the 'find my iPhone' facility. Now I can 'find my Mac' too. Which is great because if I ever misplace my iMac, all 45lbs of it, and I can't easily see the 27" screen sticking out from under the sofa cushion then I'll be able to 'find it' on line - Brilliant! (actually this only works with the MacBook, not the iMac, which does kind of make sense)

So overall the iOS 5 mega update was a bit of a damp squib. C'est la vie. On a brighter note my iPhone 4s arrived at the office today so tonight I get to play with Siri! Death is the lot of all of us and the only way the human race has ever conquered death is by treating it with contempt. By living every golden minute as if one had all eternity.
- RAH, Guest of Honor Speech at the XIXth World Science Fiction Convention


I woke up today to the news that Steve Jobs had lost his battle with cancer.


He was a true visionary, he changed the way humankind interacts with technology and each other. His passing is a great loss, to his family, his friends, to his company and to the world.


RIP Steve Jobs, and Thank you. Your legacy will go on, enriching our lives and liberating our creativity for decades to come. 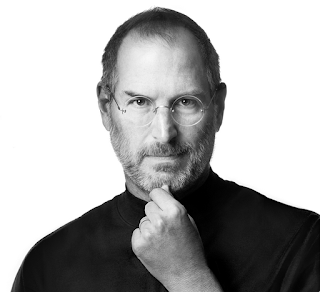